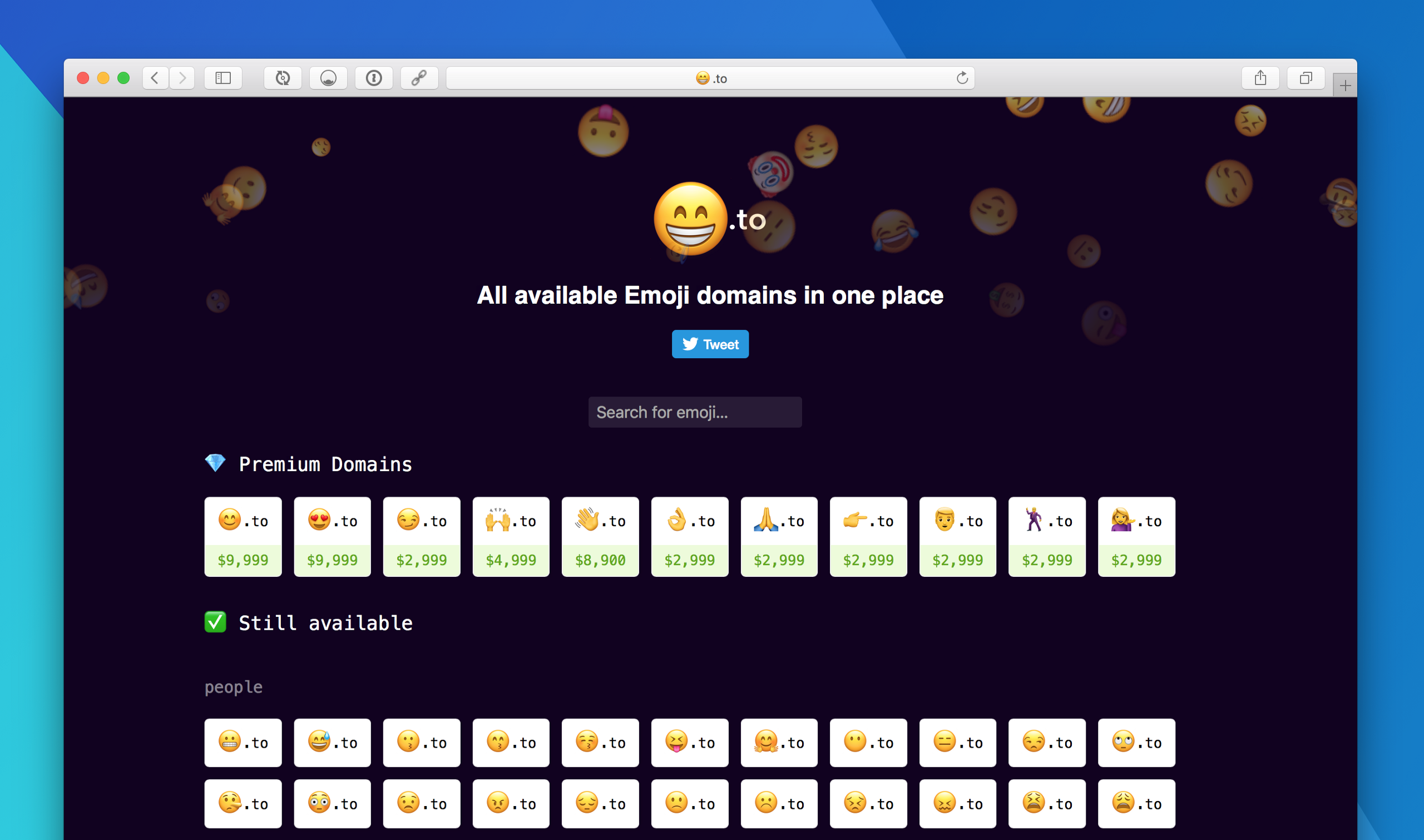 An overview of all the emoji domains that are still available to register.

As you might know a handful of domain extensions allow emoji to be used in the URL. The domain extension .to is one of them. It’s the official extension for the country of Tonga which is an island north of New Zealand. 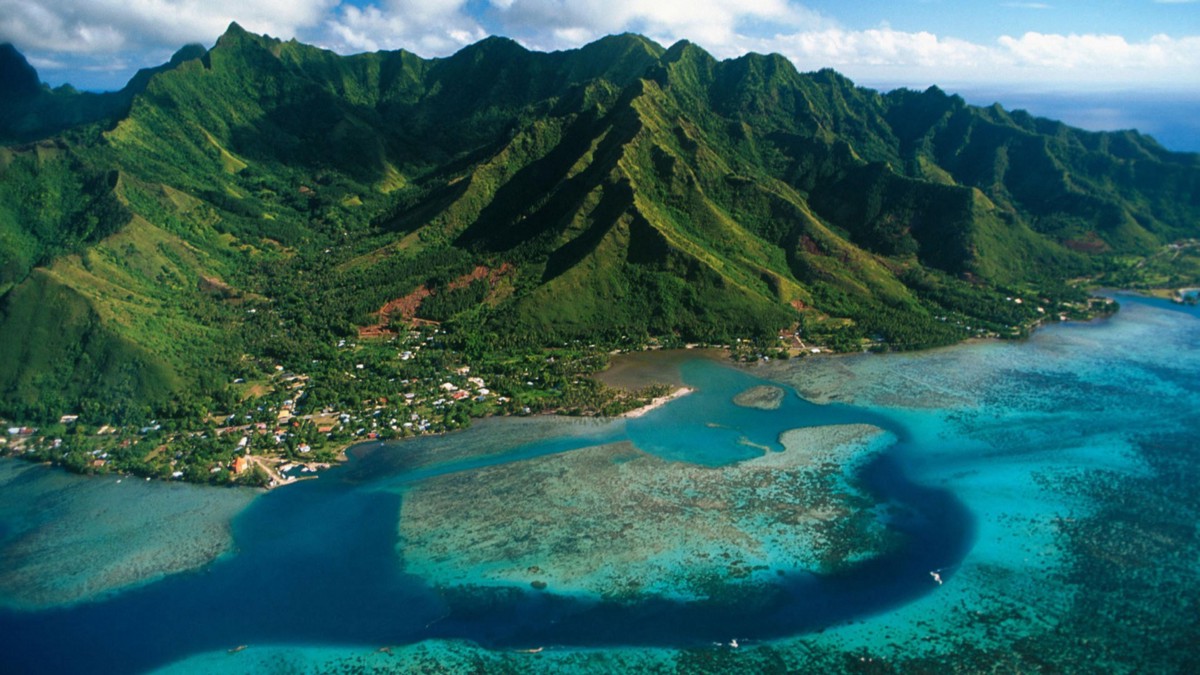 Most .to domains tend to be used as a domain hack though, where it can be part of a word (toma.to) or sentence (surf.to). This started all the way back in 20 years ago in 1997 by Boris VvZ from The Next Web with his redirect service using domains such as come.to, welcome.to, surf.to, etc.

It’s still a very popular extension today and with the support for emoji it might get even more popular.

Okay, so how did the idea for this site come about and how does it actually work? Well, I’m glad you asked!

About a week ago a nice guy by the name of Max Guerin sent me an email about how .to domains allow emoji to be used and he suggested I’d get one.

After checking with Max to make sure I wasn’t stepping on his turf, I decided it was a good idea to publicise the list. I figured it would save other people some time and figured I could potentially monetise it too.

I reached out to Register.to to see if they had an affiliate program. They happened to be working on one which was about to launch. I could get a 10% commission on every sale. Since each domain is $45, that works out to $4.50 per sale. It won’t make me a millionaire, but it might get me a ticket to Tonga. Who knows!

I guess it‘s reasonable considering all I do is set up a page. I don’t have to worry about providing an actual service, on-going support, etc.

I did check a few other registrars too, and Register.to seemed the most affordable so that worked out as well. They were also very responsive and implemented any feedback I had in a matter of days. 👏

An additional revenue model is selling premium domains. These are domains that are already registered and are now available for sale. Max has some great ones which I’m featuring on top of the page. I get a 5% commission on each sale. I also included some of my own:

If you’re wondering: do people buy these? Yes they do. Max sold ✉️.to the other day. (Not through me.)

Since it’s just a one-pager with limited interactivity I was able to build most of it in just the weekend. I initially considered just creating a static HTML page, but quickly decided it would be better if the list was kept up-to-date automatically. So I created a simple Rails project and loaded in all emoji using the emojilib rubygem. It contains different keywords for each emoji which later would make it easier to implement search.

The code of the site is quite messy. I main priority was to ship the product. Clean code wasn’t much of a priority since I’ll probably not spend a lot of time on it in the future anyway. 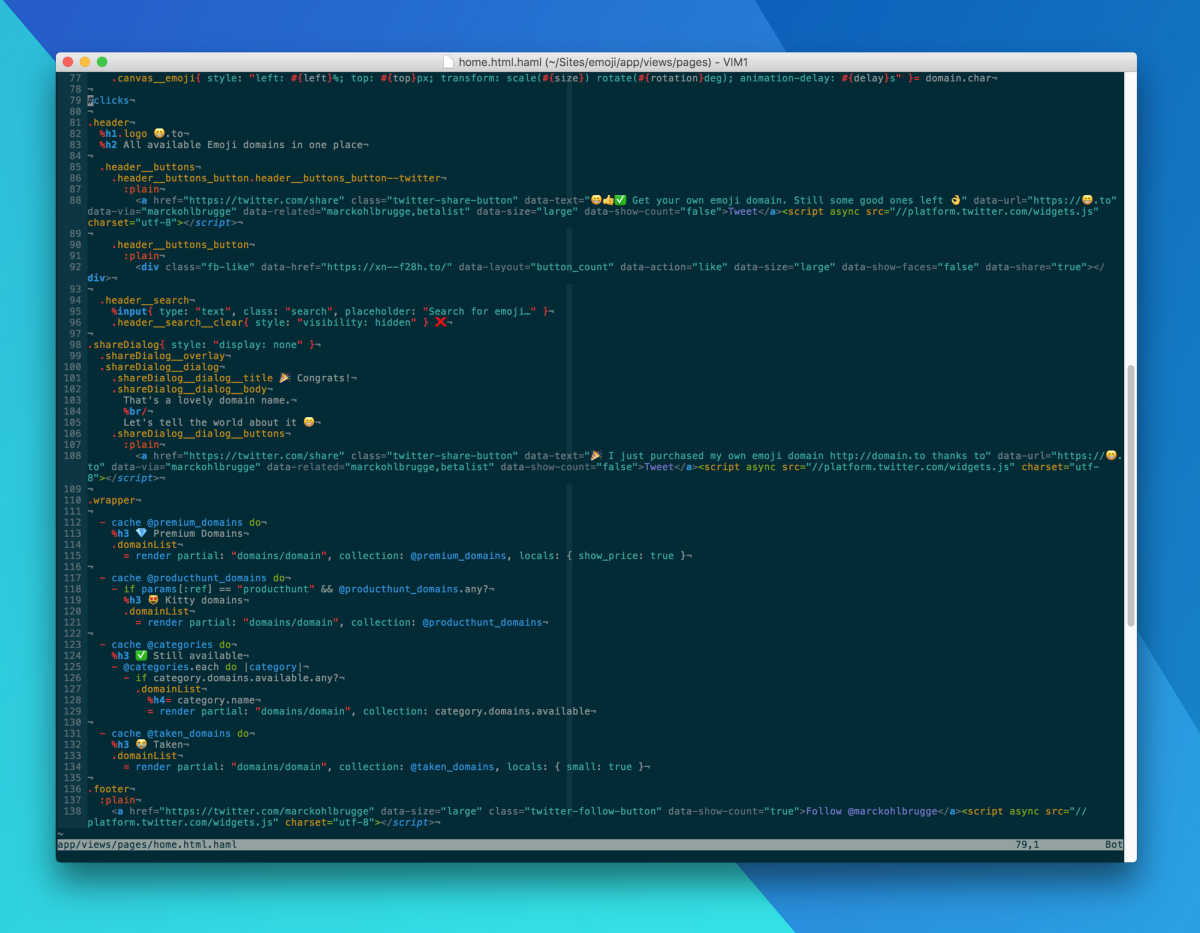 I recently started playing around with Web Sockets in Rails 5 which makes it really easy to add real-time interactivity to a site. I wanted to try it out just for fun, so I added something where it will show a notification whenever someone clicks on a domain to order it.

It makes the page feel more alive, and shows you need to hurry if you want to get a good domain. 😁 #FOMO

📣 How I plan on promoting it

Since I launched the site just now, I haven’t done much promotion yet.

I did get in touch with Matthew Hughes at The Next Web before I launched though. I promised them the scoop. That’s a win/win, because The Next Web will be the first to cover the story meaning they will get more traffic to the article. For me it provides the certainty that I will reach many people at launch.

To be honest I consider this more of a one-off project. A bit of a fun, and quick way to make some money. (hopefully!) I might also add support for more domain extensions as they start supporting emoji.

Depending on how well the site does I’ll considering selling it to someone in the domaining industry. Maybe even the registrar itself, as it could be a nice way to drive traffic.

🤔 Should you buy an emoji domain?

Yes! — Well, obviously I’m biased haha, but I think they are pretty cool and get people’s attention. I wouldn’t go and spend hundreds of dollars on them as an investment hoping to sell them off, but if you find one that fits your product or personality it might worth the $45/year investment.

Keep in mind there are some caveats to using emoji domains. Some software like Slack don’t support them well (links are not clickable), and at the moment Google Chrome doesn’t actually show the emoji in the address bar (although they work just fine).

If you do register one, let me know on Twitter!