People often ask me how I started **BetaList*. Many companies have unusual origin stories and this one is no exception. I have told parts of the story before, but never sat down to write and share the whole story and reveal how BetaList was really nothing more than a hack tricking TechCrunch into covering my other startup at the time. A hack that later turned into my current startup called BetaList…*

We developed our first prototype for Openmargin; an iPad app that would allow readers of the same eBook to exchange notes within the margins of the text. We were in need of a group of beta testers to work out the bugs and get feedback on whether the idea actually worked. Since we didn’t get anything done without setting goals, we aimed to get 200 sign ups for our beta by the end of the month.

The end of the month was approaching and we only had a few dozen sign ups. What now? Ideally we’d get featured on TechCrunch, the dream of any entrepreneur. The site was known for sending large amounts of traffic, which we could really use at this point. TechCrunch doesn’t generally write about startups that only have a ‘coming soon’ page up though, unless you’re a famous founder like Kevin Rose, or were backed by some serious funding. We were neither. I’m an entrepreneur at heart though, so I wasn’t going to leave it at that. I came up with a way to circumvent TechCrunch’s editorial process…

I have always been interested in beta testing startups. You get to try out tomorrow’s products before anyone else and often get to influence what the end result will look like too. In the early days of a startup the founders are generally quite approachable and your feedback can really make a difference. There’s also some vanity involved of course. Being an early adopter is worn as a badge of honor. Often concretely expressed in having your first name as the username on the new service.

Since I was always excited to see those ‘coming soon’ pages–which back then weren’t as common as they are today–I figured why not collect them all on one site? I knew my peers were interested in them as well, and these early-stage startups needed all the publicity they could get and nobody was giving them that.

I’ve had that idea for a while really, but never pursued it because I was already working on two startups which was challenging enough.

What drove me to pursue it this time however, was because I believed it could be my way in to get publicity for Openmargin. I could create this collection of ‘coming soon’ pages and try to get TechCrunch to feature it. Then I could direct that TechCrunch traffic to my own coming soon page. Unlike Openmargin this would be something I could put live in a matter of days. I decided it was worth a try. 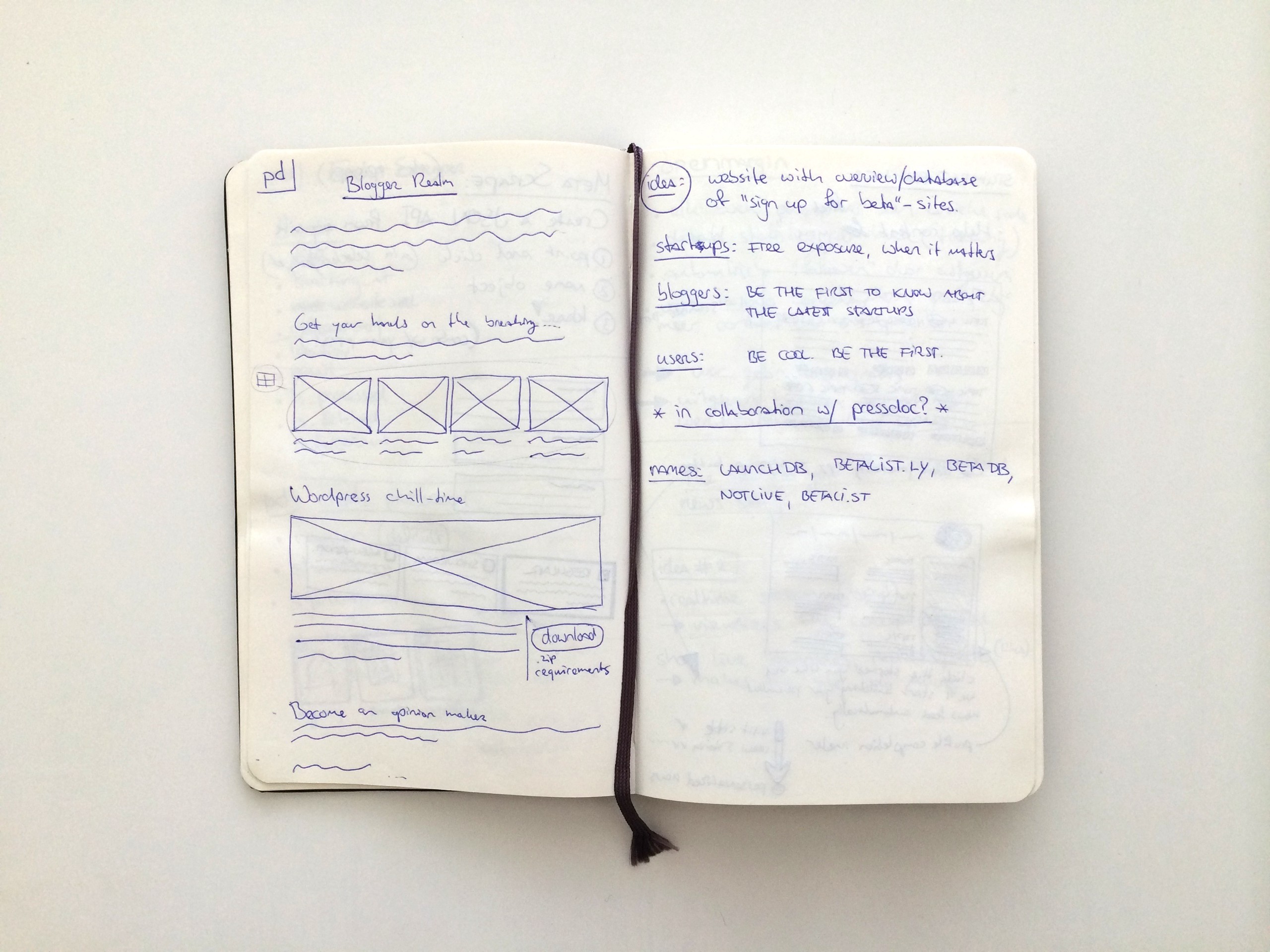 I came up with different names, but quickly decided on BetaLi.st. Not because it’s a list of betas, which people often assume, but referring to the ‘beta list’ every featured startup had you could subscribe to. BetaList.com was already taken, so I opted to go with the domain hack BetaLi.st

During the course of a weekend I created a simple Tumblr website, modified the template, created a quick logo and added some pre-launch startups I found on sites like Hacker News. This was the result: 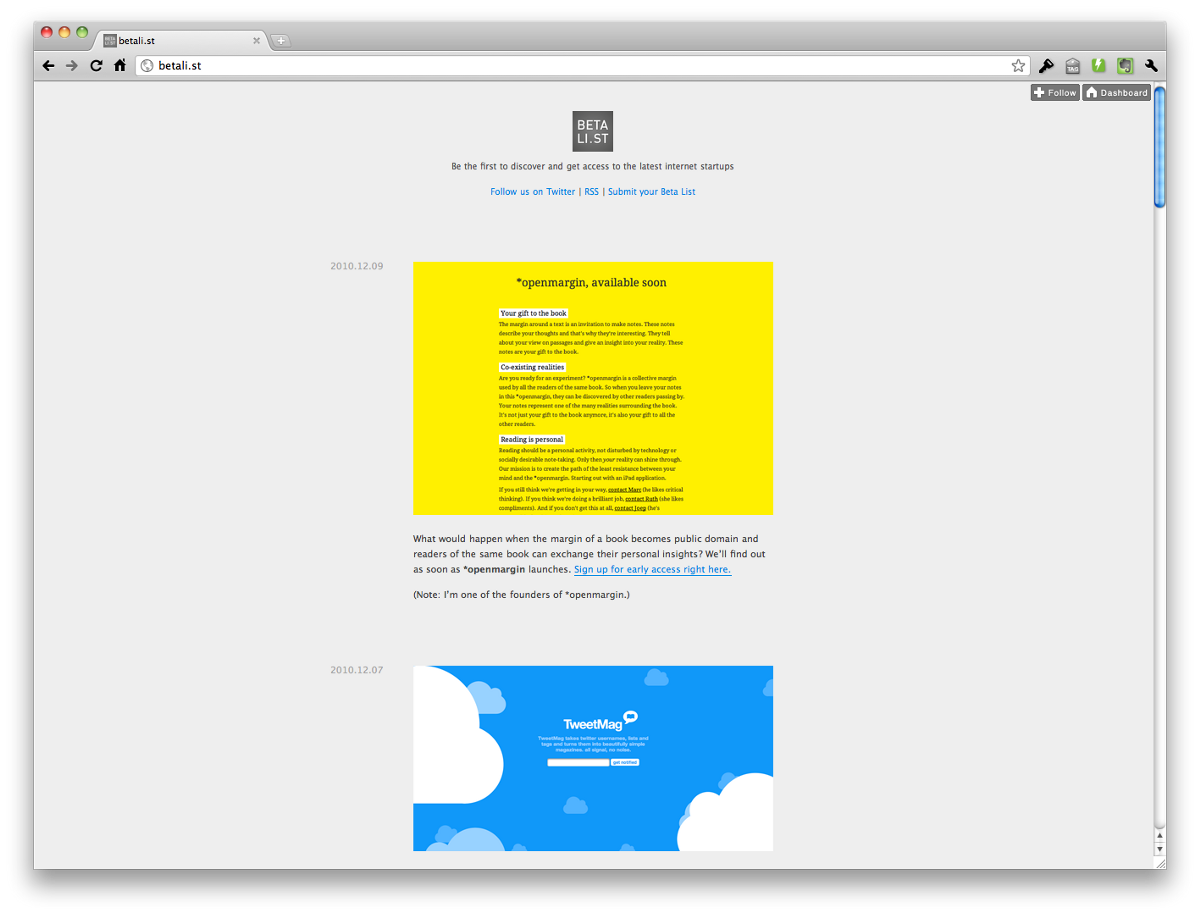 It was really basic, but it served its purpose. The focus was on the featured startups, not on BetaList itself.

I decided it was time to email TechCrunch. I had some experience contacting journalists in the past so I knew I had to keep it short and simple. The website was self-explanatory and I wrote a press release with the background story using PR.co (formerly known as PressDoc) which was the other startup I co-founded and was working on at the time.

I can’t remember whether I sent it to a specific person or their general email address, but this is the email I sent on December 10, 2010 at 4:25am (this was just before bed time for me, I had a crazy sleeping schedule).

Hey, a little bit more on the concept here please?
Thanks,
AI was surprised to get a response. The whole idea for starting BetaList in the first place was to get picked up by TechCrunch of course, but I didn’t expect it to really happen. I always considered it a long shot.

I was excited to get their response. Now that I got their attention I felt comfortable going a little more in depth. Here’s what I replied:

Hi Alexia,
Please excuse my brevity. I know you guys (and gals!) get tons of emails so I kept it short. Here’s a bit more info:
As an internet fanatic I’ve always been fascinated by the amount and variety of new internet startups launching every day and I love checking out these new sites.
I’ve started Beta List to help these up-and-coming startups gain exposure and their first beta users. Early-adopters, people who aren’t afraid of trying something new. In return, these users get to try out the latest web apps, register their vanity URL and brag to their friends and colleagues about the nth private beta they are in. Imagine having been one of the first users of Facebook and have seen it evolving in the monster that it has become today.
So, how does Beta List achieve the above goal? Simple, the website provides a daily overview of webapps that haven’t launched yet, but do have a beta list. This ensures our readers get access as early as possible and the startups listed are always new.
Think of it as TechCrunch for startups that haven’t launched yet ☺
If you have any additional questions, please let me know!
Best,
MarcNote how I didn’t mention Openmargin and even though BetaList was just a simple Tumblr page at this point, I communicated it as something bigger than that. The email seems really casual, but I spent a lot of time crafting it. Whenever emailing a journalist you need to share excitment, tell a story and convince them how your story is one their audience wants to hear about.

Two and two is four

The next day I visited the city with a friend. I didn’t check my phone the whole day, so on my way home in the bus I finally looked at my phone. The unread email badge on the Mail app showed a number in the hundreds! I thought I got spammed, but when I opened the app it showed hundreds of emails from Twitter notifying me I got a new follower for the @BetaList Twitter account. It didn’t take me long to put two and two together (4!) so I went to the TechCrunch website to see if they featured BetaList. Lo and behold, they did! 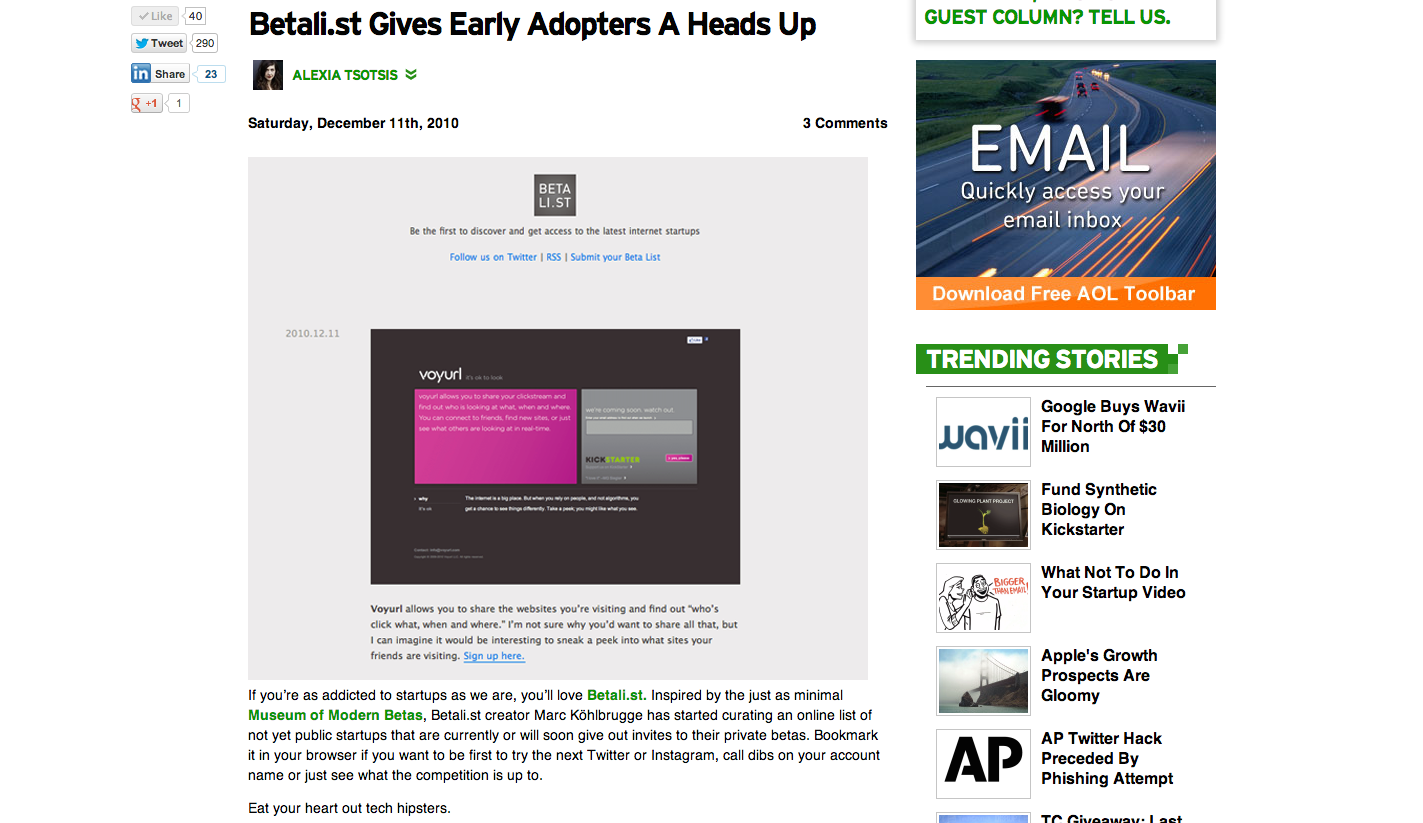 TechCrunch featuring Beta List on December 11th, 2010When I got home, the first thing I did was publish the draft post I had set up for Openmargin. It was the reason I started this whole thing after all. Openmargin was now the top featured startup on BetaList so a large chunk of the traffic coming from TechCrunch clicked through to it and signed up for our beta.

We easily reached our goal of 200 sign ups. Mission accomplished!That’s how BetaList got started. A simple hack to leverage TechCrunch and get publicity for my other startup. ☺

Later, other blogs like Forbes picked it up as well resulting in even more traffic and although initially I didn’t have concrete plans to take it further, the overwhelmingly positive feedback from both early adopters and featured startups made me decide to keep it going. BetaList has since grown it into a profitable business and I’m blessed being able to work on it full-time today.

We also made good on the promise of “discovering the next Facebook”. We featured Pinterest, one of today’s hottest startups valued at $5 billion, before they launched and even gave away invites to their private beta. 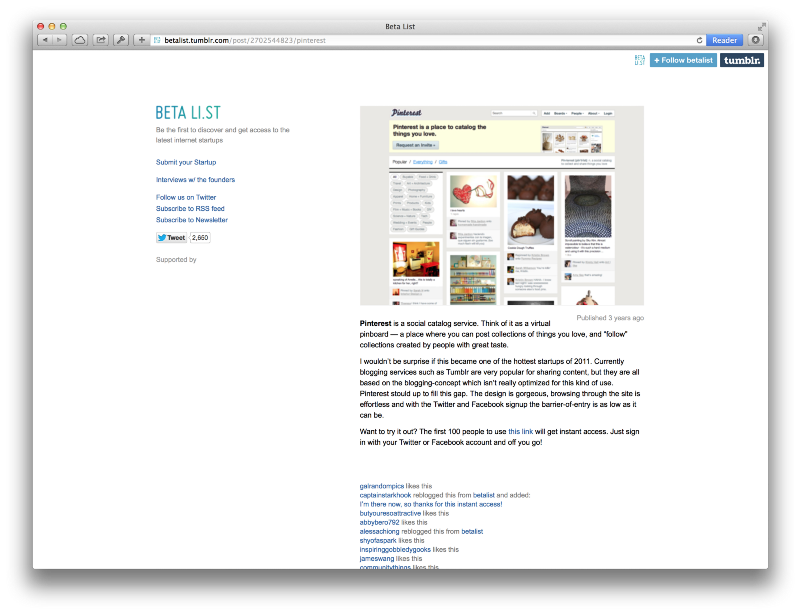 Looks like my prediction of Pinterest becoming one of the hottest startups came true. Pretty neat!Other startups we featured before they launched and made it big include IFTTT (amazing and successful service), Fab ($336M in funding), Mailbox (acquired by Dropbox) and many many others. We’ve featured close to 4,000 startups so far.

Consequently a lot of investors and journalists are keeping an eye on BetaList to discover the next big thing.

In reality I didn’t really trick TechCrunch into writing about Openmargin, but I was able to leverage their reach. I’m grateful for Alexia writing about BetaList, because without her article I don’t think I would have ever pursued taking BetaList further. Thank you.

A lot has changed for me professionally since I started BetaList. My network has grown considerably, and I’m able to help literally thousands of beginning and experienced entrepreneurs get publicity for their new ventures. It has been a hell of a ride so far, but I feel I’m just getting started.

P.S.
I’d appreciate a tweet if you enjoyed the article.
Encourages me to write more. Thanks!

Get notified by email* of my next articles including…** (+1) From Hobby to Business: How I accidentally monetized BetaList